Cyber Seniors - In One Chunk


I am older. Somehow that seems more palatable than saying I am old. But maybe that is why I was attracted to a little show called Cyber Seniors.

I was perusing Netflix to see if there was any new stuff they were offering me, and I actually did find something . The show Cyber Seniors was described as a documentary in which high school kids teach old codgers about the internet. It sounded as if it would be delightful to watch in small chunks. I do that sometime – pick a show that I can watch fifteen or twenty minutes, shut it off for a couple of hours or days, then come back and watch another chunk. And the idea of high school kids becoming involved with Senior Citizens appealed to me.

Actually I watched it in one big chunk. 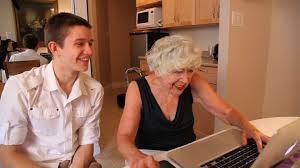 .
Cyber Seniors is not flashy. It is simply tells the story of retirement home people trying to understand what the internet is, and the story of 15 and 16 year old kids trying to teach it to them. An exchange of culture and mores that had some hilarious pitfalls
.
She was 93 years old. “I went to www.email.com, but my email wasn’t there!”

He rose in horror:
“No. I don’t want my photos imploded!”
“No Sir, they are uploading, not imploding!”

Mouse. Login. Password. Escape. Internet Explorer. Firefox. Save. Delete.Website.Email….and on and on – all foreign concepts to those who haven’t grown up with computers and the internet.

“What do you think about those Senior Citizens? Do you think there really is a generation gap?
“There is a huge generation gap! It’s crazy – but they are kinda’ cool. You know…like they’re people.”

“Now Ma’am, this is You Tube and you can see videos here. Even Music Videos.”
“You mean, people singing.”
“Yeah. Is there a song you would like to hear?”
“Well…oh, oh, yes. ‘The Hallelujah Chorus’. You know it don’t you?”
“Uh…no.”
“Your music education is lacking, young lady.” 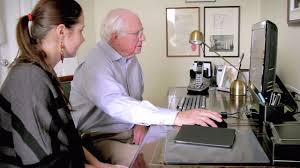 Soon, everyone in the nursing home was singing to the Hallelujah Chorus.

Someone got the bright idea of having the seniors make You Tube videos. They would have a contest, and whoever got the most hits would win and be honored at a party. Brilliant.

For we got to see how a lady prepares her snacks….she uses an iron to make grilled cheese sandwiches and puts corn on the cob into a coffee urn to boil them. Or an 90 year old lady rapping (and she initially didn’t know what a rap was) about how she still had all her teeth.

Cyber Seniors. Not a lot of production quality here…..just a lovable, poignant, laughable story. If you are an old codger, you can relate. If you are a teenager, you too can relate to the rolling eyes and muffled guffaws.