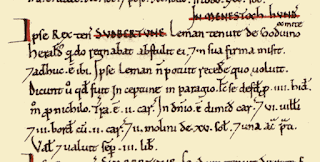 Everyone... Few... No one who knows me will recognize that I am from strong, vigorous Viking stock, with a bit of Celtic thrown in. That makes me Viking-Celt...or Celtic-Viking which fits because I do like Enya. In other words, my heritage is Saxon. It is quite an itsy bit possible that I come from Royal Personage, i.e. His Majesty Saeberht, King of the East Saxons who kicked the bucket in 619 A.D.. But I suppose that is pushing credibility a bit.

What is credible though is I am a descendent of a person named in the excerpt from a document pictured above.

My name is Jerry Mann, and since this is Throwback Thursday, I figured I would throw way back to to the year 1027 A.D. to the birth of my 23rd Great Grandfather, Soberton Le Man. It is sometimes written as Soberton Leman -- but Le Man looks cooler. All this is interesting, but actually his true name was Soberton Man. He added the 'Le' part to suck up to those stupid Normans who barged in and conquered the country in 1066. They tended to like 'Le's' in front of their names.

The quote at the top of the post is from Volume 1, page 38 of Liber de Witonia, which became the Anglo-Saxon Chronicles and the book of Final Judgement -- or the Doomsday Book.

You see, that Norman guy, William the Conquerer ordered that an inventory be taken of all that was in his kingdom. This resulted in the multi-volume doomsday book (which is now housed in the British National Archive on Kew, England). If you were Viking-Celtic-Saxonish like me you could probably understand the quote above. It says:

Meonstoke Hundred, The King holds Soberton Leman, held it of Earl Godwin, Harold when he reigned, took it from him, and made it a royal manor, and it so remains. Leman himself could not remove where he wished. It is said that he held lands in Finchdean Hundred, in parcenary.

Hampshire, The King's land, Bosmere Hundred. The King himself holds 2 1/2 hides, in Hayling Island. LEMAN held them in parcenary of King Edward, Harold deprived him of them when usurped the kingdom, and converted them into a royal manor, and they remain so. They were then assessed a 21/2 hides, now at nothing.

Yeah, I know. They talked funny back then.

What is this about? You see, my Really Great Grandad and his friend Earl Harold Goodwinson owned 250 acres of land (2 1/2 hides). Soberton was land owner gentry and a knight under King Edward. Well, old Edward went and died, and Harold Goodwinson became king: King Harold -- the last Anglo-Saxon king. Well Harold, being kingly and all, took the 250 acres along with other land, and made it part of the Royal Manor. This screwed Soberton. In fact, he was double-screwed, because he was ordered to stay on the land as a tenant and care for it. I suppose during this process, he was de-knighted.

Well, Soberton did what any decent Viking-Celt-Saxon would do under the circumstances. He went and drank a bunch of grog (I am speculating here) and went home and had sex with...uh, Mrs. Le Man. This is fortunate for me, because they had a son they named Osbert fil Leman. It is because of Osbert that I am here today.

How is that for a Throwback?

Yes, I have been able to determine a pretty reasonable line of male descendents from the 11th century. I have slowly erased most of the vagueness with with a firmer degree of, well about 80% certainty and have tried to discard speculation, such as: It is reasonable that the lineage of Soberton Leman is traceable to King Saeberht, yr. 619.

Some of the shaky areas are Coats of Arms. It is important to note that a Coat of Arms is bestowed on a person, not a family. I think they should change this rule. Since there are four, and possibly five knights in the family, I keep coming up with...

This is the oldest that I have found. It belonged to Sir Richard LeMan from sometime in the 1300's.

I think this is from the 1500's. Somewhere in my piles of stuff I have a person for this......just can't find it right now. Just trust me.

This belongs to s Sir Somebody Mann and is the latest Coat of Arms that I have found. Yeah, yeah I know. I have his name written down somewhere....somewhere.


Can I pick one and use it? Maybe use it on business cards and stationery? Can I be sued....like for impersonating a knight?

The Mann family name evolved from Man, Leman, LeMan, Lyman to Mann and they migrated from Saxony, England to Massachusetts, Virginia, Tennessee, Oklahoma and then Texas.

Forsooth, ye knaves and knavettes. I sign off with: