Driving to Houston with a Blue Tooth

My daughter said, “When you exit the motel, turn left and go down Legacy until you hit the North Dallas Freeway. There you turn LEFT. Then you travel to…..”

I had been visiting my kid in Plano, which is a suburb of Dallas, and I was preparing to return to Houston. While she is pretty sharp, she certainly doesn’t have the fine-tuned sense of direction that I do. I knew that I wouldn’t turn left onto the freeway. That would take me north instead of south toward Houston. So it was with this bit of directional knowledge that I left the motel at 5:30 a.m. the next morning.

I drove down Legacy in the right lane, knowing that I would need to turn right at the freeway. As I approached the freeway I looked for the encouraging road signs to confirm my decision. Crap! South was to the left. It was fortunate that it was 5: 30 a.m. so I could plummet across four lanes to turn LEFT! How could my innate sense of direction be 180-degrees out of phase? Crap!

Okay, maybe the kid is sharper than I thought.

When I first got in my car that morning my phone chirped. This disturbed me because I knew my phone was magically connecting to my car. I am disgruntled to know that machines are talking about me behind my back. My kid had explained to me that I could somehow talk on my phone through my car audio system.

“You mean you haven’t hooked up your Bluetooth?” she asked in amazement.

“Well, I just haven’t got around to it.” She, of course, knew that I didn’t know what she was talking about, so she grabbed my phone and started punching buttons and punching things on my dashboard screen, and there was some chirping going on.

“Now we will load your contact list.” I grunted which is my standard response when I don’t understand what is happening.

As it turned out I can now talk on the phone without talking to the phone.

So as I was driving to Houston, I was worried that someone was going to call me. I think I was supposed to push that button on the steering wheel. Just not sure. And then people would see me driving down the road talking to myself and think I was a crazy man. I’m not sure that technology and I fit into the same groove. I still don’t like the thought of machines talking to each other behind my back!

I gave up worrying about it. I was now concentrating on the fact that I wanted to find a McDonalds, and go to the restroom. McDonalds is designed pretty well for bathroom people. You can go in and head off to the right to the restroom and you don’t even pass by the staff. So they will never know that you weren’t buying anything. But this time I was going to be a good customer and get some coffee.

If I could find a McDonalds. My criterion was simple. I wanted a McDonalds along the right side of the freeway….easy on and off. And I couldn’t find one. McDonalds are supposed to be everywhere. I kept looking for the signs that listed exit restaurants and for that big M. I found two Subways and a Dennys, but no McDonalds. How can one not find a McDonalds?

I drove and drove and my desire for a McDonalds became more urgent. Finally…there! As I exited the freeway I noticed there was also a place selling Kolaches….and I was immediately confronted with a decision. The thought of Kolaches seemed pretty exciting.

You know what Kolaches are. Right? This bakery good was brought to Texas by early Czech settlers. (You

need to Czech it out? Sorry….couldn’t resist.) Kolaches are a pastry, akin to a soft dinner roll, stuffed with all kinds of goodies….sweet jelly like filling, or stuffed with sausage and cheese…my favorite. It is the dough of the Kolache that makes it so good. It has to be soft with a hint of sweetness.

So I bypassed McDonalds and swung into the bakery, which had a restroom, by the way. I purchase Kolaches – the mild sausage and cheese Kolaches. The jalapeno sausage seemed to be a bit much for breakfast. But, I failed to follow my internal rule of, “Always get one less”.

That is an eating rule. If I want three tacos, get one less….two tacos. Two donuts, get one. Large order of fries…get a medium order. The One Less rule reminds me that I always over order. I got three Kolaches. One too many.

Back in my car and my phone and the auto started having some kind of conversation. I think it is a conspiracy.

People were driving too fast on I-45. I needed to find my speed sweet spot. When the speed limit is 60 mph, I usually set my drive computer at 63. I figure the cops will give me a pass. At 65, then about 68. But the speed limit was 75. Most places don’t have speed limits of 75…but in Texas, well they like to thumb their noses at everyone else. Texas seems to pride itself about going against the grain. Everyone else seems to be codifying gay marriage, and Texas is jumping through hoops to not make it legal. Firearms are a bad thing and Texas deems they are a good thing so everyone is allowed to carry one. It seems that Texas just wants to be obstinate for the sake of being obstinate.

But, I have to agree with the 75 mph thing. Long roads and wide-open spaces. It seems to work. So I figure that 78 mph would be the sweet spot. Or would it? If I were a Texas Highway Patrolman, or a County 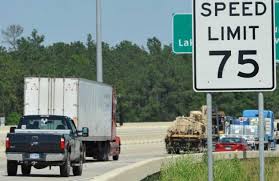 Sherriff Deputy, or a Texas Ranger, or a County Constable, or in the city limits, a Policeman (where do all these overlapping legal jurisdictions come from?), I might think, ‘Hey – we already set a high speed limit. You should be satisfied with that. Now this idiot wants to go even higher? I’ll show him!’

I debated this for a few moments…then threw caution to the wind and set it at 78 mph.

I mused about the fact that I liked kph better than mph. I’ve driven a lot in Canada and they do the Kilometers per Hour thing. A kilometer is shorter than a mile….so you accumulate them faster than you do miles. It just seems like you are accomplishing more. And when you drive at 85 kph, it really seems like you are flying along, when really you are going 50-something miles an hour. Yep…I like kilometers. But that’s all. I don’t like the other metric stuff, especially Celsius. The temperature in Celsius lacks precision. For each degree in Celsius, there are a bunch of degrees in Fahrenheit. So Fahrenheit and Kilometers are the way to go for me.

So I figured I was traveling around 125 kph which made me think I was flying.

My daughter had told me that when I got to Conroe, Texas I should turn left onto Highway 105 and cut over to 59 which is somehow the same as I-69 to drive on into Houston. I don’t know why 59 and 69 or the same. I guess 69 is the interstate name, and 59 is the intrastate label, Is this Texas thumbing their nose at the Feds again?

So I turned left onto 105 when I got to Conroe. New territory for me. I happened to notice one of those signs that said, ‘Buckle Seat Belts – State Law’. Why did it say ‘State Law’? If I see a Yield sign, am I to assume it is not a State Law? How about ‘Speed Limit – 60 mph’. It doesn’t say State Law….I wonder if that would hold up in court as a speeding defense? I wonder about these things.

I’m glad I solve that mystery.

Cut and Shoot. It seems that there was a disagreement involving religious freedom. The Baptists and the Methodists agreed that they could both meet in the same building, although at different times.  The agreement also stipulated that neither would bring an Apostolic into the building. I think Apostolic is Catholic….but I’m not sure. Well, it seems that one of the religious groups decided to bring in an Apostolic guy to do some teaching. This was a problem that led to a confrontation, complete with guns and knives.

Now you think you understand why the town is named ‘Cut and Shoot’. Well, you would be wrong.

According to the story, a young boy was witnessing this confrontation and shouted, “I’m scared. I am going to Cut around the building and Shoot into the woods.” Well, something like that anyway. So that is how the town got its name. The boy’s exclamation defused the situation and his words were remembered.

I made it to the dual highway 59/69, and as I approached Houston I decided to take the technological bull by the horns! I punched a button on my dashboard that had a picture of a phone. On my screen a list of my contacts came up. I punched HOME. Suddenly I heard a loud dialing. Then  the voice of my wife.

I talked into mid air with people driving around me looking at me and thinking I was crazy. “Hey, I’m talking from my car.”

She didn’t understand. “I mean I am not holding a phone or anything….just talking to my car.”

“Uh, I’m going to be home in a few minutes. Could sure use some coffee.”

“Really – I have a Bluetooth thing and I don’t have to do anything….just talk. My car called you, not my phone.”

“Okay honey, you can tell me about it when you get home.”